The past couple of weeks I have been listening to a lot of INXS. The recent telemovie, INXS: Never Tear Us Apart, has reinvigorated my love for them.

INXS was the soundtrack to my youth. The music was consistently in the background of my life for the better part of a decade, from their new-wave/ska/pop through to rock, to the more funky/dance elements. At high school INXS was a band that everybody liked. They spanned the gender/social divides. They weren’t a “girls’ band”, like my other teen musical loves, WHAM! Whether you were cool and into Duran Duran, or a bit of a dag and into WHAM!, INXS was for everyone. For me, INXS managed to cut-through all the WHAM!, all the Bananarama and all the dance/house music of the late 80s/early 90s.

The other day Senorita Margarita, who is a few years younger than me, asked me about a video clip that was recreated in the telemovie. “What was that song where they were sitting around a dining table?” I began humming Just Keep Walking and we realised that wasn’t it. I eventually Googled, “INXS, dining table” and I was able to find the name of the song, The One Thing, on YouTube. It was from 1982 and while INXS weren’t quite on my radar then, they soon would be.

My first clear memory of them was seeing Burn For You (from The Swing) on Countdown in 1984. I couldn’t forget that unique staccato of the electric keyboard. I think of been driven by parents to parties and concerts, usually wearing some variation of a tube skirt and a t-shirt with geometric fluro patterns on it. INXS was always on the radio. I remember devising dance routines to I Send A Message in Movement class at high school. I remember not being able to concentrate on our Hunter Valley geography excursion in 1986 – because all I could think of was getting to the Listen Like Thieves concert at the Sydney Entertainment Centre that night.

INXS won swags of Countdown awards throughout the 80s. They won six ARIAs (Australian Record Industry Award) including three for Best Group in 1987, 1989 and 1992, before being inducted into the ARIA Hall of Fame in 2001. I remember buying the Kick album (on cassette) in year 12 and hitting the dancefloor to New Sensation (radio version and assorted remixes) what seemed like every Saturday night in 1988. I remember being mystified by Mystify, and being swept away by the romance of Never Tear Us Apart. Kick dominated the charts that year and the single Need You Tonight won five MTV awards. I played that album over and over and over again. 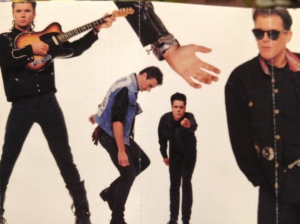 When I met my friend Miss D at a journalism course in 1989, she thrilled me with the story of her winning a contest the year before, where the prize was to hang out with INXS in Hawaii during their global Calling All Nations Tour! Double treat: INXS and Hawaii at the same time! She and her sister also hung out with them backstage at concerts in Sydney, literally bumping into Kylie Minogue on the way to the drinks table, and went to their end-of-tour party.

Miss D, who was a young teacher at a girls’ school at the time of her INXS socialising, was a legend to her year 9 students. But she says she never saw any wild behaviour from any of the band while hanging out with them. They seemed like nice down-to-earth boys from her account. They were Australia’s biggest rock stars but didn’t act like the cliché.

We were all surprised (not to mention a little bit jealous) when news broke that Michael and Kylie were an item. I found it vaguely annoying.  Kylie “Michael made me sexy” Minogue. She had been elevated from Jason Donovan’s girl next door to sophisticated girlfriend of the rock god. I should be so lucky indeed.

The INXS hits kept coming. In 1990 I would stride along Oxford Street to my temp office job, listening to my walkman with Disappear blasting through my headphones throughout another Sydney summer. I remember thinking, “Wow, another hit!”, and feeling happy and grateful that they were still making great music and that they were reliable and consistent in doing so. Especially since my other teenage musical loves had let me down: WHAM! and assorted other bands who faded away faster than the spangles on a bedazzled pair of stonewash jeans in the 80s spin-cycle of pop.

I saw INXS in concert again at the Entertainment Centre in 1991. After more Grammy-nominated early 90s hits like Suicide Blonde and Beautiful Girl, INXS faded a little into my musical background. But they were still comfortably always around. Like celestial bodies, I didn’t always see them, but I knew they were always there.

I was shocked and saddened that November day in 1997 when I heard the news that Michael was dead. Sixteen years later, I’m not the only one reminiscing. Kylie Minogue told News.com.au on February 26 that she still loves Michael. “A guy with that much charisma, it doesn’t just switch off, you don’t just forget about that person. I don’t know what it was like for other women in his life, but my love for him remains. It’s good everyone’s love (for him) has been reinvigorated after the show.”

When Michael died, the remaining members of INXS lost not only their lead singer, but their dear friend and band brother. As Kirk Pengilly told Channel 7’s Sunday Night program on February 23, he thinks the main thing is to focus on remembering his friend. “Whatever happened, no one will ever know, so just remember him and leave it at that,” he said.

INXS went on to record and perform with a variety of guest singers over the years. During a performance as a support act to Matchbox Twenty in Perth in November 2012, INXS announced the performance would be their last. But now I’m not the only one listening to their music again.

INXS: Never Tear Us Apart has resurrected a huge interest in the band and its music. The Very Best compilation CD has hit number 1 and is the highest-selling record in Australia so far this year. Tens of thousands  of INXS’s albums and  singles were downloaded in the week after Part 1 went to air. The Kick album has also splashed back into the top 10, after peaking at No.2 in 1987. “This is the best resurrection of a catalogue that had flatlined which has ever been seen in Australia,” an industry expert told News.com.au. Kylie, who is back in Australia to film The Voice and promote her new single Into the Blue, is happy about it too. “Having just come back into Australia and seen the chart and seen everyone have such passion for INXS again is fantastic.”

INXS manager Chris Murphy, who along with Tim Farriss was a consultant on the telemovie, says that one of the motivations for telling the story of INXS was Michael’s daughter Tiger Lily. As Murphy told The Sunday Telegraph (February 9, 2014): “Forget the ratings, forget the sales, forget everything – this was about restoring Michael’s dignity and remembering there’s a teenage girl at the end of all of this… To see Michael at 25 as (actor ) Luke Arnold portrays him, she’s just going to go ‘wow’ and have such a great perspective of who he really was.” The Sunday Telegraph reports that Tiger Lily will pocket her late father’s share of the profits from the telemovie.

It was a ratings smash in Australia. Although Andrew P Street on the music website Faster Louder complains (in a very funny review) that the characters spoke in unnaturally long sentences of exposition in order to cram two decades of Australian music history and INXS’s place in it, into a few hours. Sort of like the sentence I’ve just written. This is probably true to an extent, in some scenes. But so what? I think the telemovie served to tell a great Australian story while showcasing some of the greatest pop-rock songs ever written. And I loved every minute of it.

It got me digging out that Kick cassette from 1987. When I realised I had nothing to play it on, it got my buying the new CD, INXS: The Very Best. And it really is the best. Every single hit they’ve ever had plus a DVD in a three-disc set!

These days thanks to YouTube I can watch INXS in the video clip The One Thing (1982) that was so beautifully recreated in the telemovie. I watch a 22-year-old Michael singing his lyrics with his new-romantic hair-style and his hint of black eyeliner, a fit-looking supreme keyboard player Andrew, a pre-spectacled Kirk rocking his sax, Tim and his guitar-gymnastics, a blond-tipped Garry on Bass, Jon, the 80s school-girls’ favourite, thrashing his drums, and I yearn for their youth. I feel a sense of retro-anticipation for a band of young men on the verge of something huge. In this video, we can watch their youth, beauty and talent perennially perched on the verge of the greatest rollercoaster ride of their lives. They had all the right ingredients to create musical magic, for years. It all just worked.

At the time of writing this post, production company Shine Australia was set to screen the telemovie to 80 international buyers at a showcase in London.  And this month Murphy will fly to New York for meetings about a Broadway musical. So it looks like the INXS love song has never really stopped. The story, the music, the brand of INXS has many notes left to sing.

What remains for INXS, and for us, is the music and the good memories of these six Sydney boys becoming one of the most commercially successful bands Australia has seen. Their talent, chemistry and collective charisma has earned INXS a fond and permanent place in Australia’s emotional and cultural landscape. And in mine. Thank you INXS.