Term 2 started here in the ACT last Tuesday after a quiet and different “school holidays” which took in Easter at the beginning and Anzac Day at the end.

My son George and I go to Sydney to see my family every holidays. We usually celebrate Easter in Sydney and then Greek Easter in Canberra a week later. But this year, like everyone else we had to stay where we were because of the “C-word” restrictions.

This recent school holidays looked very similar to the last three weeks of “term”, apart from the fact that my 12-year-old George stopped spending time on his school-issued laptop, and started spending time looking at Tik Tok, making Tik Toks and watching the Big Bang Theory while I continued to work from home most days. I also joined Tik Tok, because he asked me to. Then I realised how much fun it is (and bloody addictive). We even came across his performing arts teacher on there, so extra fun! She gave him a special shout-out in their first “back-to-school” online class this week.

We got out for fresh air most days and have taken to walking up Red Hill regularly. When not in front of a screen, George is also quite partial to sweeping and vacuuming, and I’m not complaining. We do live in a house with four guinea pigs and accompanying hay scatter.

The weather was spectacular between Easter and Anzac day, not cold, sunny Autumn days…

Pedestrian traffic on the exercise track was quite manageable.

George is also quite fond of slime. He tried to whip up the first batch from ingredients we already had at home, but something went wrong. So we dashed out to buy a slime kit, which was as essential as a jigsaw puzzle I think.

The boy who lives next door half the week, one of George’s school mates, came over to visit a couple of times, even though I wasn’t sure it was allowed. But I thought it was good for their mental health. Oh, and I’ve made numerous phone calls.

Guinea pigs – the highs and lows

In other news, we had our boy guinea pigs desexed two weeks ago. The vet agreed to perform this non-emergency surgery during this time since we have also girl guinea pigs and don’t want to breed them. And we wanted these post-pubescent guinea pigs to have the surgery before they got any older. It was quite traumatic for one of them though as he developed a hernia post-op and had to have a second surgery to fix it the next day.

Pumpkin was sent home with pain medication and both he and his brother Peanut were on twice-daily antibiotics for a week. George was very good at administering their medicine through a syringe into their tiny guinea pig mouths. In around four weeks time, the boys will be able to share an enclosure with our girl guinea pigs and be one big happy herd (hopefully).

was in order. Mmmm capsicum has never looked so good. 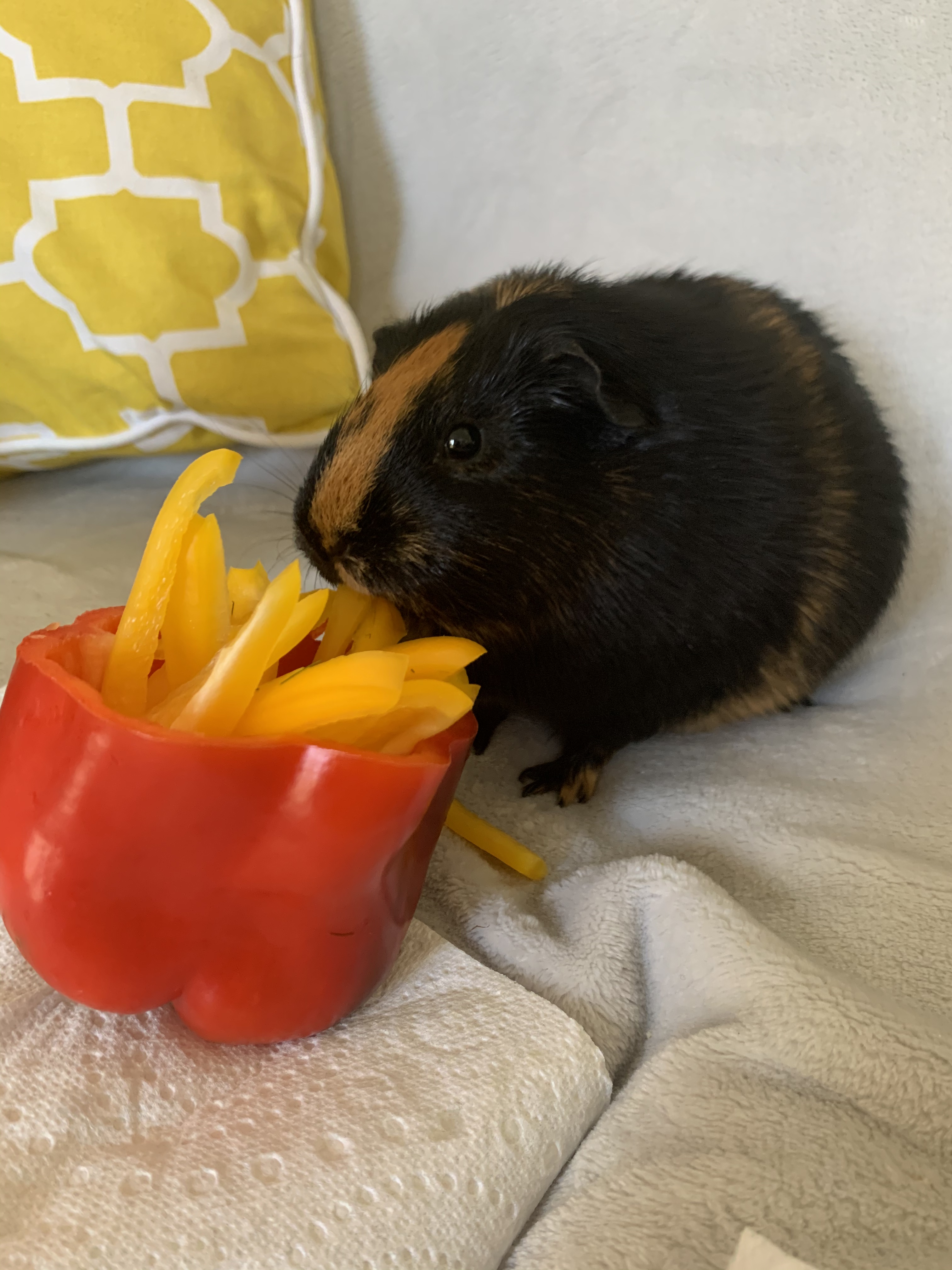 2020 marked a new moment in history for ANZAC day, as this year people couldn’t gather together like they normally would. While I didn’t get up early to watch the service on TV live from the Australian War Memorial (a small group of officials, not members of the public, were there) I did watch the morning news a bit later and saw images of thousands of people in their driveways with candles, in their own quiet remembrance.

My sister always takes part in ANZAC Day ceremonies, particularly as she works for an organisation offering support services to veterans. She took some pictures in her driveway.

George and I have been enjoying Masterchef. The new judges are OKaaaaay. One of them, Jock Zonfrillo (what a well-balanced name, masculine, yet feminine, Scottish, yet Italian), reminds me of Prince Frederik of Denmark.

I do miss 2 out of three of the former judges. But I’m enjoying seeing many of the old favourite contestants return. My son enjoys watching Reynold whip up amazing desserts: when he puts on those goggles and is enveloped by – I don’t know – is it dry ice? It comes from some metallic food preparation device – I don’t know – is it an ice-cream maker? He looks part scientist, part mechanic. He reminds me of Flint Lockwood from Cloudy with a chance of meatballs.

I also recently enjoyed the 2017 reality show Mariah’s World on Nine’s Life channel, documenting life behind the scenes of Mariah’s Sweet Sweet Fantasy tour including her breakup with James Packer. We don’t see much of James on camera (we see him in a party scene with his arm around her in one episode), but in the final episode Mariah reveals her decision to end the relationship.

Now at the end of the first week of Term 2, there is talk of lifting some restrictions; In the ACT, that means non-essential shopping and a two adults visiting another home. We’ll see what happens on the school front. Currently the plan is that public schools will stay closed for the whole term, with all learning done online.

I’m getting more comfortable with uncertainty. We never really know what’s going to happen in life, but the pandemic has pushed that idea into the forefront. In the meantime, there’s so many things to be distracted by.

Are you a Masterchef fan?