My neighbours – my own personal TV soap opera

Who needs to watch mindless TV soaps when I have a life-size doll house opposite my block of flats, populated with the pantheon of our cul-de-sac?

I do like to spy on the neighbours. More like perving really. Well, the two god-like young men in the building opposite will appear on their balconies half-naked at various times of the day.

Exactly one year ago I wrote a post, More eye-candy neighbours in which I talked about the three flatmates in the apartment across the road. Two handsome, usually shirtless young men and a woman. I wondered about the relationship between them.

Since blond eye-candy has moved out, the woman appears much less cranky; maybe because she finally has the love-nest she always wanted with dark-haired eye-candy. I have since seen them walking down the street holding hands.

One day not long after blond eye-candy moved to the 3rd-floor flat, I noticed a young blonde woman emerging from the living room onto the 3rd-floor balcony. The next day she was there again. And the next. She lives there now.

Handsome Shirtless Blond man also makes regular balcony appearances, thank god; shaking out his towels, hanging out his washing, barbequeing a sausage. He emerges from the living-room doorway onto the balcony, like a god on the mountain-top, his tanned body and blond hair practically sparkling in the morning sun. When I catch a glimpse, I stop whatever I’m doing and watch him. He is a male Venus from a Bananarama song – let’s call him Zeus, the ancient Greek king of the gods. He’s got it, yeah baby he’s got it.

The dark-haired guy on the second-floor is like a second-tier god. More of a Poseidon, god of the sea.

If Handsome Shirtless Blond man is Zeus, then the guy in the street level flat is Hades, god of the underworld. Middle-aged, hairy and overweight, he sits on his ground floor balcony, smoking, coughing and hawking up things from sun-up till sun-down and beyond. When all is silent in the street I can still hear “Smoko” coughing and sometimes laughing ebulliently at 1am. He talks on the phone a lot.

I like my real-life doll house. It’s comforting to see the same people day after day, living their lives, engaging in their simple daily routines, without ever having to actually speak to them.

But our street’s annual “Neighbour Day” on Sunday wanted to change all that. Neighbour Day is an event supported by our local council and Relationships Australia. The goal is to foster a sense of community in your neighbourhood and encourage people to get out of their homes and spend time in a communal setting getting to know the people that live around you.

Great idea right? But alas, none of my living dolls/gods attended our “Neighbour Day”, a lovely gathering down the end of our street in the community garden.

Although we weren’t honoured with the presence of the Eye-Candies, or Hades, our local Mayor Toni Seltzer did come along and told the crowd that “tending gardens also tends our neighbourliness.” We are so lucky to have a great community garden where people can grow veggies but also just sit with a cup of tea and talk to the neighbours in a lovely communal space.

Spider Boy who is really tween-age now, was stuck in a toddler swing for a while because mummy couldn’t undo the child-proof lock. Silly mummy. I had to call on one of the neighbours to figure it out for me.

It was so lovely under the trees. Our community garden is in a little fenced-off area behind a local sports field.

One of the neighbour’s daughter and son-in-law have their very own jumping castle for their two small children. They schlepped it all the way from another municipality to share with our neighbour kids. 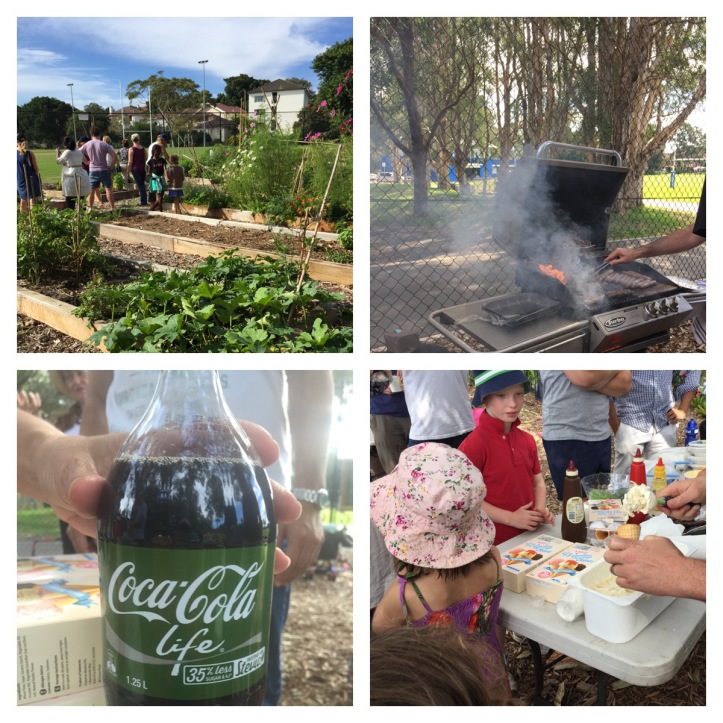 And someone else who works for a supermarket chain brought along this new variation of Coca-Cola. It’s “Green” Coke. Made with Stevia and with 35% less sugar, it tastes almost like “the real thing” and better than Diet Coke in my opinion. It will be on sale soon. 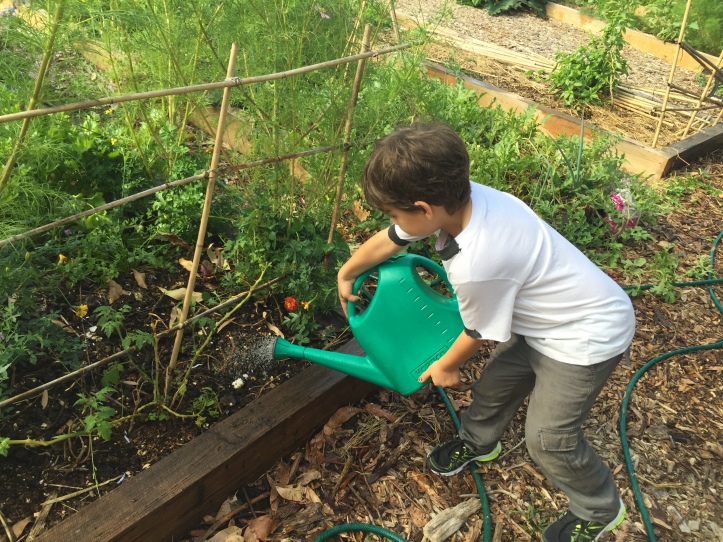 And there was a bit of watering to finish off the afternoon.

For more information on Neighbour Day go to neighbourday.org