So here we are nearly at the end of November.  I feel like I am hurtling towards the end of the year, exemplified by having Halloween and Christmas decorations in one post. Here’s some edited highlights.

Spider Boy decided to be a vampire for Halloween, which was easy as we already had a Harry Potter robe.

The local shops tried to put on a little Halloween spirit with a few stalls and displays on the footpath. But at 3.30 in the afternoon, no one else was trick-or-treating. And does anyone actually play tricks? More like treat-or-treating in our neighbourhood (once we waited till 5ish), before going home to watch Tim Burton’s Corpse Bride.

The next day, November 1, was the Day of the Dead, a yearly festival where people pray for and commemorate friends and family members who have died.

My sister, Señorita Margarita, a Mexican art aficionado, has introduced me to the tradition. I don’t actually set up an altar like she does, but I really love the concept.

Spider Boy and I met auntie/Senorita Margarita at El Topo in Bondi Junction, one of our favourite restaurants, for a Mexican lunch. Spider Boy actually ate a taco with real chicken in it – there was not a nugget or a chip to be seen. There were donuts though. But they were quality donuts with a delicate slightly spicy chocolate sauce.

Then we went to Senorita’s place to see her altar.

One Monday after school, I dragged Spider Boy to Sculpture by the Sea, an annual exhibition on the Bondi to Tamarama coastal path. He actually wanted to head straight home and prepare his news for school, a poster about Water Safety. But it was the day after Sculptures officially closed so it was today or never. We stayed half an hour at Sculptures AND got the news poster done.

So here’s a tip: Sculpture by the Sea is really crowded on weekends (and much of the weekdays when it was actually on, it was cold and raining). The trick is to go the day AFTER it officially closes – because they haven’t taken down all of the sculptures yet – and it’s not crowded. Thanks to my friend Lulu for that idea.

Sydney has had a lot of rain this month. These photos of Rose Bay were taken at 10 in the morning from under an umbrella.

The friends I have known for the longest time (as opposed to my oldest friends) and I went out in Darlinghurst.  A night where a few realities hit. But more about that in another post.

I was surprised by the joy of Christmas decorations at the Queen Victoria Building last weekend. Yes, they are stunning. Their presence also reminded me that time is running out to get a million and one things done! 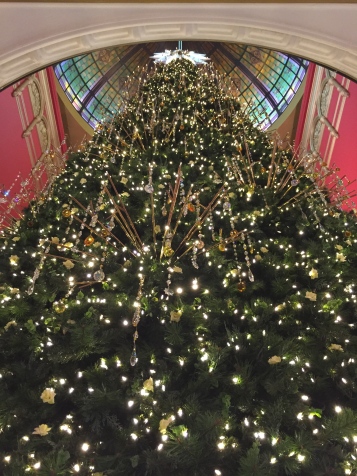 Is time speeding up for you? I think that happens at the end of the year and it’s relative to our expectations of what we want to achieve.

Whatever you’re hoping to achieve by the end of the year, I hope it goes well for you.