The school holidays are over and life is back to its routine, although I’m still working on Spider Boy getting to sleep earlier after a few late nights during the holidays. We didn’t do any “Mathletics” on the computer like we really should have, but did play Monopoly (the junior version) and there’s maths in that, right? Spider Boy is always reluctant to part with the cash to purchase property but gleefully receives the rent I pay him when I land on something he does own.

I always have such high hopes for craft projects during the holidays, but I am realising Spider Boy’s hopes for it don’t match my own. He worked with me on a foam pirate ship for about five minutes before getting frustrated with it. And it was frustrating – it was a kit from a craft store and it just didn’t work. I continued on without him trying to make it work while he did something else. Eventually I just left it – a floppy, PVA glue-smeared mess (it’s supposed to dry clear, but not really).

I finally put four brown bananas to good use before they liquefied in the fruit bowl by making a banana cake. I have to say this cake was not only edible, but a great success – Thank you Women’s Weekly Classic Cakes cookbook. I froze the cake and took it to Canberra for Spider Boy’s paternal family (“I baked you a cake, sorry about the missing piece”), thus cleverly saving myself (and my mother) from the rest of it. Spider Boy claims he doesn’t like banana cake, although will inhale banana bread at cafes. 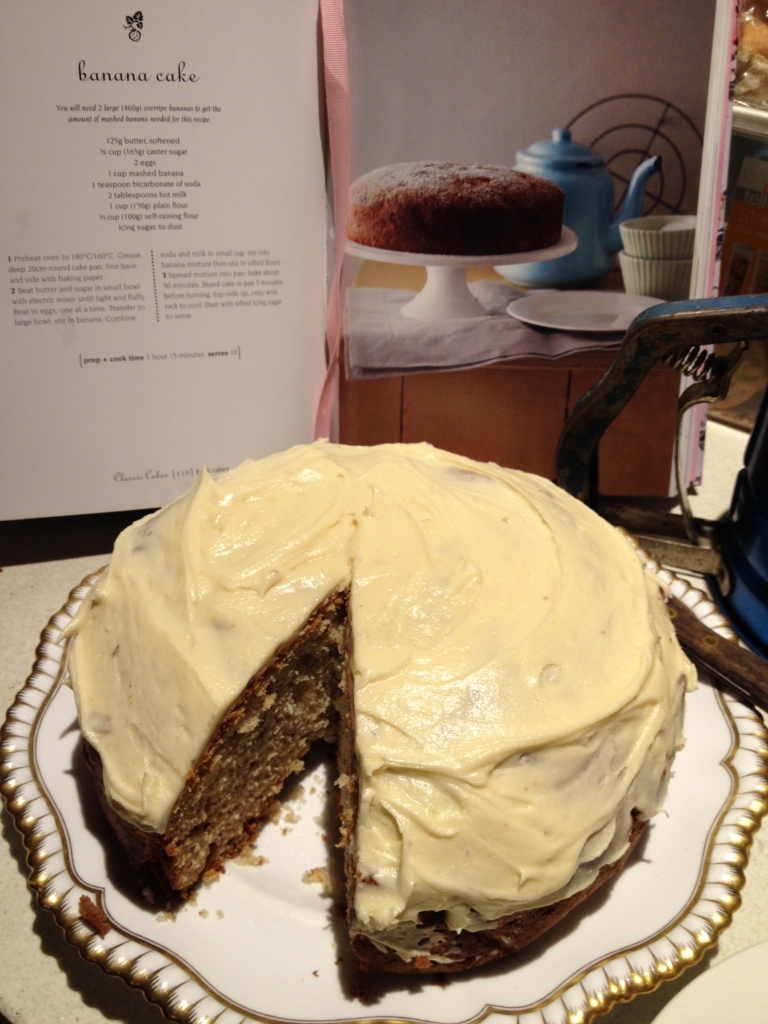 We ventured into Kathmandu for the first time ever – they were having a 60% off sale – as we had to outfit ourselves for some serious outdoor activity in our nation’s capital. Canberra welcomed us in all its wintry beauty. Brrrr. I always forget just how cold it gets there in winter. Even though I lived there for six years. This visit it was – 3 and -4 degrees celsius overnight. That’s MINUS, in case you didn’t notice the tiny minus signs there.

I was determined to get on to an ice-rink this winter (didn’t actually skate at Sydney’s Winter Festival a couple of weeks ago) so we got straight off the bus from Sydney onto the temporary outdoor rink in Canberra. Note to self – must try not to project my 1980s ice-dancing obsession onto Spider Boy. I can just hear American figure skater and 1988 Olympic champion Brian Boitano talking about “the costumes, the glamour…”.

After a few goes around the edge of the rink with the penguin helper, Spider Boy declared, “I don’t need the penguin anymore.”

That’s my boy! Blades of Glory, here we come!

This giant inflatable snow-globe had an attendant (unlike the one at Darling Quarter in Sydney), so for $2 we could step inside to frolic in the “snow”. We stayed in there for minutes on end and posed for many happy selfies. Goodness knows what that fake snow was made of, but the snow-globe attendant helpfully told me, “If he gets it in his mouth, tell him to spit it out.”

A couple of days later we drove to Corin Forest, about 30 minutes south of Canberra for some snow-filled fun. This was the first time Spider Boy had seen (real) snow.

For $5 we hired a toboggan and Spider Boy was able to sled down the gentle slope. “I love snow!” he said as he crashed into a bale of hay at the bottom of the run.

Spider Boy’s favourite TV ad is the AAMI one where the young P-driver from the 80s pulls up beside his future self (as a father with a learner driver son beside him) and wants to drag race. “Nice car, Mate!”, Spider Boy now says at every opportunity with accompanying drag-race face.